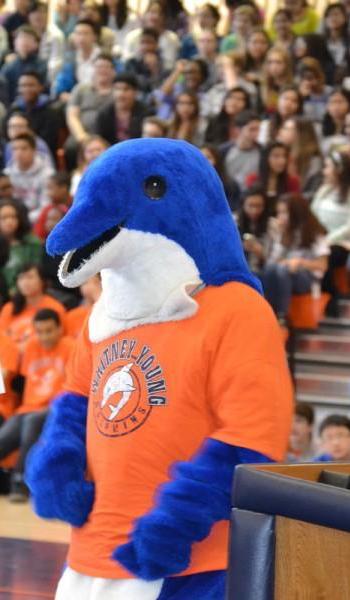 Flip the dolphin. A character so elusive no one noticed he was gone. On January 11, 2019, my team and I set out to find his suit, but what we actually uncovered was far more disturbing than we expected.

The hunt for the suit began in the athletic building. We arrived at Coach Cassidy’s office, our signed note from Mr. Rehak in hand. We inquired about the location of the suit but were greeted with doubt and mistrust. “They’re trying to find out who Flip is,” Mr. Nunn concluded. We explained our intentions, but it didn’t matter. Neither Cassidy, Nunn, or Locks knew the whereabouts of th

At the main office, we explained our intentions once more. We needed to find Flip’s suit. No one in the main office knew where the suit was. In a sudden moment of recollection, the security guard exclaimed, “Wait! Ask Mrs. Gayles. She would know.”e suit. They redirected us to the main office with a warning from Cassidy: “I don’t think you’ll want the suit anymore once you put the head on.”

We had a lead. Upon arrival at her room, we asked if she knew where the suit was. “It doesn’t exist anymore,” she replied solemnly. We were baffled. How could Flip be gone? The suit, as it turns out, was ruined in the wash. An unfortunate, undignified end for such an iconic piece of Whitney Young culture. R.I.P. Flip.