Guitar Concert Sends Off Seniors With A Strum 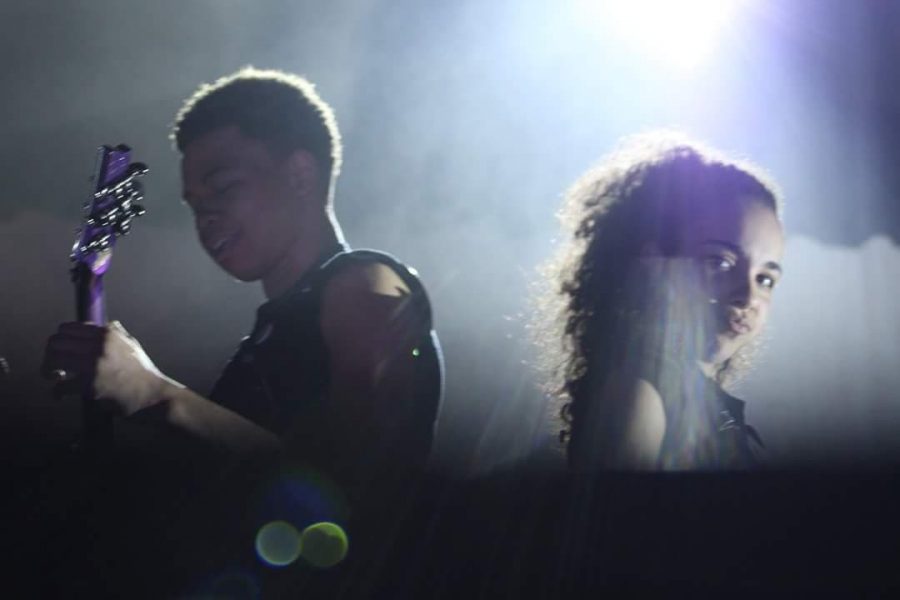 This year’s guitar concert capped off a year of scales, songs, and shredding for Whitney Young’s guitar program. The show featured everything from songs like Hotel California to original songwriting written and by students.

Every year, the seniors say goodbye to Mr. Peek by giving him a gift of their choosing, each year more ridiculous or sappy than the last. Last year the class of ‘17 gave Mr. Peek a Squier stratocaster, or “strat” in seafoam green, his favorite, that they all signed. It was a very emotional event, tears and hugs flowing like the glorious mane of Django Wilson ‘19, drummer (see photo).

This year’s gift was a guitar case for the strat last year’s seniors had gotten Mr. Peek. The black pleather shell covered in funny photos from class. Three seniors carried the case on stage, and revealed that the inside was full of inside jokes: 6 bottles of beet juice and a case of Diet Pepsi. Egged on by a boisterous crowd, Mr. Peek chugged a can of pepsi on stage.

After the students thanked Mr. Peek, it was time for him to thank the students. It’s tradition for students to fill out a form with how many hours they’ve practiced, advice for future students, and any additional words of advice. One of the most moving quotes was from Terrence O’Neal ‘18 says, “the guitar concert has been one of the best experiences of my life. It’s like a home for me, even more than my actual home sometimes.”

After the show, there were more tears. “I’ve made lots of friends, and I said I wasn’t gonna cry,” said Lily Everett ‘18, President of Coffeehouse Crew, crying while taking a group photo. (see slideshow)

Strong connections to the guitar program aren’t just for the Advanced Performance class. To Shania Haynes ‘18, enrolled in Intermediate Advanced, “The guitar program means so much to me, I love these people. I have so much fun playing and songwriting.”

Thanks to all the seniors who performed and made the guitar program as wonderful as it is! Here are some pictures to send them off: