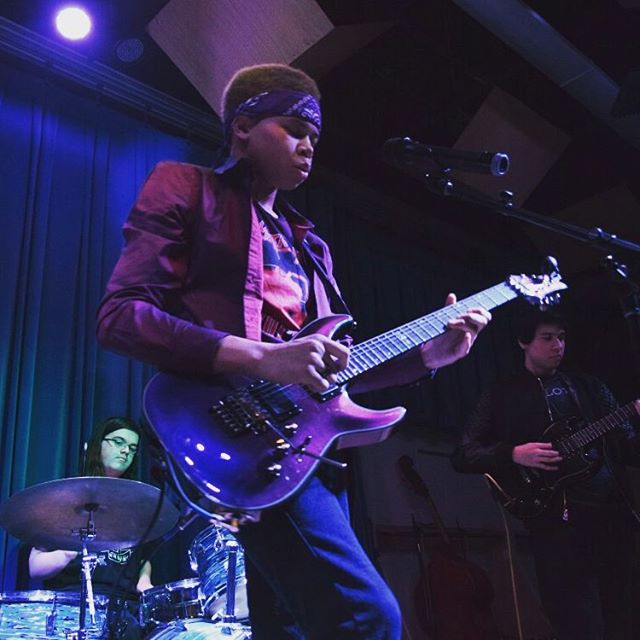 Coffeehouse, it’s Whitney Young’s one and only open mic. It’s a chance for young musicians to get on stage, show off, get experience, and just generally have fun.

Under the stage lights of the orchestra room this year’s first show brought smiles to the faces of the crowd of students. The show kicked off with an acoustic set by Coffeehouse Crew Vice President Dearborn Plys ‘19 playing an original song called “Mr Ribbit Come Back Home”. Ari ‘19, a student visiting from Jones, laughed and said “that was great.”

Halfway through the show the whole vibe shifted when Ethan Brewer ‘21 took over as DJ for his electronic mix, and announcing that he was dropping an album.

Some Whitney Young bands also made appearances at this month’s show. Byrdzu, a four-piece metal/fusion band played their originals and so the dancing began. Terrence O’Neal ‘18, lead guitarist and singer of Byrdzu, shredded and showed took us all to “The Forest”.

Finally all the chaired were pushed to the side to make room for the pit as Give All Your Support (@giveallyoursupport on instagram) took the stage. The crowd screamed along to their songs “I Don’t Like You” and “Better Now”. Nick Walsh ‘19, an audience member said “they really need to get a bandcamp or a soundcloud ‘cause that song has been stuck in my head.”

As is Coffeehouse tradition, the final set was performed by Crew President Lily Everett ‘18. The pit filled in with the crowd lounging on the floor, jamming out to Lily’s gorgeous acoustic musings. Bassist of Give All Your Support, Emiliano Kresser ‘19 said “Lily’s songs give me life.”