There was much speculation about how spirit week and homecoming was going to turn out. With the changing of class color day and the switch of a homecoming football game to a homecoming soccer game, the vibe among students was very uncertain in the days leading up to the traditionally anticipated week. Many people were very upset that the dance was moved back to October and would’ve much preferred that the whole spirit week was moved back as well. It was also a shame to see the whole football season cancelled after weeks of training. People outside of school were shocked as well as they heard from news outlets of the announcement.

Nonetheless, spirit week and homecoming was very much filled with enjoyment and traditions. From the amazing pep rally to the senior girls running on the field during halftime, everyone had something to remember. For seniors, this last homecoming was definitely something to savor every moment.

“It was live…very emotional because all the seniors were in one place which is hard to get,” said Tyler Bady ‘18.

“Overall I had a lot of fun and ate good and got to hang with my ‘18 gang and we won the game,” remarked Diondre Sweezer ‘18.

Boys Varsity Soccer won the homecoming game against the Curie Condors 3-0. One of the captains, Evan Wimberly ‘18, scored a goal and assisted a goal.

“The soccer game was better that a football game, to be honest, and we actually won a homecoming game this year,” said Amira Young ‘18. 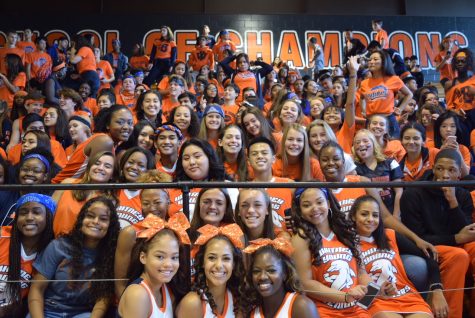 The seniors enjoying their last homecoming.