The Fallacy of Those Who Serve and Protect 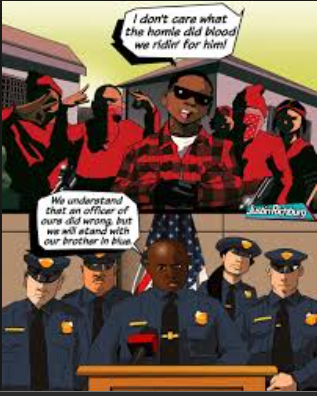 The lack of indictments on the boys in blue who were involved in the deaths of people like Sandra Bland, Eric Gardner, Kendra James, and Alton Sterling has caused more than just distrust of  the court system and police departments; entire communities have lost all hope in the police officers that patrol their neighborhoods and actively pursue a change that makes them feel safer. Senior Ja’naya Horton is one of many of the socially active students here at Whitney Young that has participated in multiple protests organized by the Black Lives Matter movement and those affiliated; she explained her reasoning for joining the protests “It isn’t right that in a city like Chicago with so much diversity that we are so segregated, The preceding years’ had been filled with violence and death, some most notable deaths caused by those who are sworn to serve and protect.  worse than that, it isn’t right that every neighborhood in the city can be described as a ghetto, and that the patrolling officers more often than not don’t represent the community. They don’t care for the people because they don’t look like them, no matter where I go it is obvious in the way the police act that I’m seen as a liability or danger even in my community”. The concern Horton has on the segregation of Chicago is very salient today. Before anything a police officer is a person. In Chicago people are sectioned off and don’t have much interaction with the average person of a different ethnicity. If we decrease the segregation in the city and work on integrating communities people all around will have a better understanding of others and won’t feel threatened by just the presence of someone who is different. Better understanding and comfort with individuals will decrease these high stress situations leaving more chance for de-escalations rather than situations that end with fatality.

In many of the cases investigated for the police’s justification of use of excessive force or their responsibility in general for cases like Sandra Bland where her death was said by officers to have been a suicide the police departments have stood by their officers without hesitation. In a slightly less grim example, a biracial 15-year old was handcuffed, brought to the ground and pepper sprayed after being put into a police car while still handcuffed. In this case of police misconduct in Hagerstown, Maryland this is what Police Chief Victor Brito had to say; “It‘s their job to act in the interest of our community, and they are trained to make those decisions to the best of their ability. The officers applied their training and responded within the guidelines…and used the appropriate level of force…” Many disagree and believe that if this is what police officers are trained to do, then they aren’t trained correctly. Sarah Williams a junior here at Whitney Young really had something to say about this “When I look at that girl I see myself, she was young and active and small, but she didn’t look threatening. There was absolutely no reason for them to handle her the way they did or pepper spray especially when she was already in the car and unable to harm anyone. It just makes me weary of the police even in a place like Chicago. You never know who’ll get the good cop or bad cop.” A concern of police misconduct has led many people to think that officers are not given the sensitivity training needed. Police officers aren’t trained to de-escalate things but to disarm and neutralize a threat. This leaves room for interpretation of the officer in every situation, this interpretation can be affected by the events of an officer’s day which is why more protocol and training needs to be put into place.

You can view the video of the assault of teen here