Review of DubTV’s “The Classroom” 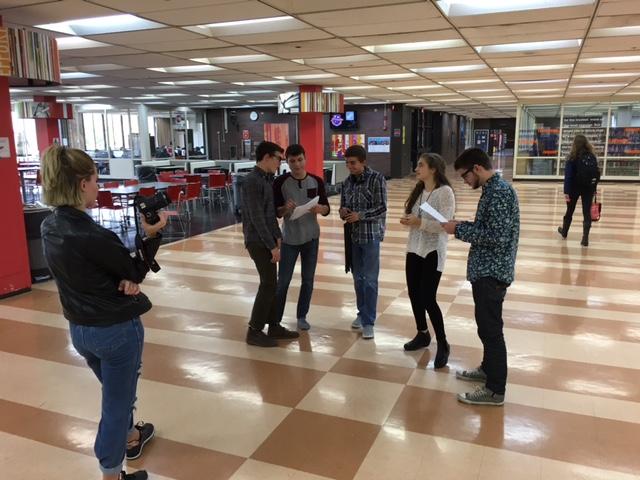 “The Classroom” is DubTV’s new in-show program created by senior Ryan Wangman ‘16. So far there have only been two episodes of “The Classroom” shown on DubTV and although it’s difficult to judge a show this early into its production, “The Classroom” has definitely sparked my interest. “The Classroom” follows the lives of stereotypical high school students as they pull pranks on each other, overtly flirting with their crushes, and just live their day to day lives in a humorous, exaggerated manner. “The Classroom” is shot in a style similar to that of shows like “The Office” and “Parks and Recreation” where the main story is broken up by character interviews, testimonials, and reactions to the camera.

One of the things I like about “The Classroom” is that the finished project has always been extremely well finished. The filmers like to use a lot of different camera angles and switch up the perspective the audience has of a scene which makes the watching the show more interesting to the audience. The editors of the show have done a really great job of make the transitions from camera to camera and scene to scene very natural. I especially like the use of the traditional school bell noise to change scenes because it makes the transitions seem less abrupt and make the entire episode feel connected.

My favorite character of “The Classroom” so far is Sabrina Sawyer’s character Sara the obsessed stalker in love with Alex West’s character Ian because I loved the scene when Sara drew a picture of Ian in the first episode of “The Classroom.” Sabrina’s acting combined with the camera work in this scene made me truly laugh out loud for the first time while watching the show. The camera work in this scene was very clever because at first you couldn’t really see the picture Sara drew of Ian very well, but then the camera suddenly shows a close up of it and the audience can see how horrible of a picture it is.

Overall, I am extremely excited to see where how the characters of “The Classroom” develop throughout the year and I look forward to the next installment of the show.