Andy Dalton Is Just What the Bears Need 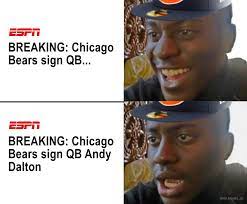 The Bears have a quarterback problem. Well, correction, they HAD a quarterback problem. After signing Andy Dalton this past week, they have solved their biggest problem going into the 2021 season. Many people, including myself, had considered the Bears were going to go with the myriad of other options that were available this offseason. Honestly, it was thought that Ryan Pace might get to redeem himself by being able to get the quarterback that was drafted after Mitchell Trubisky (who performed much better), but, alas, it was not meant to be.

Heck, even this past week before the Andy Dalton signing it was thought that the Bears would be able to get Russel Wilson. Who, by the way, easily could have won the MVP award last season (although, to be fair, Mitchell Trubisky is the only quarterback in the history of the National Football League to win the NVP award. And to quote the NVP himself, “I feel like a boss driving my mom’s van.”) It even got so far as for many fans to expect the move to be announced on Thursday. This was because many prop bets that were set up for where Russel Wilson was going to go, were taken down, and then the Bears Super Bowl odds went up. Which, of course, because fans are fans, led to a lot of people thinking that the people behind these bets knew more than we did. Obviously, that wasn’t what was announced on Thursday (however it was reported that the Bears were pursuing hard after Russel Wilson), and, of course, people were angry. However, I do believe that Andy Dalton is the perfect answer to the Bears’ problems, especially after they released Kyle Fuller, their all-pro cornerback.  At this point, he better be, considering the fact that he said, “They told me I was the starter,” and if he doesn’t do well, everybody in the organization is likely going to be out of a job.

Regardless of that though, the Bears definitely made the right decision, because the fact is, he’s way worse than Russel Wilson. Statistically speaking, Russel Wilson is better in every single category than Andy Dalton, and that is just how the Bears have always done it. The Bears have never had a truly great quarterback (their best was Jay Cutler, and he was quoted as saying, “The good thing is I play quarterback, so I don’t have to be in that great of cardiovascular shape.”), and somehow, they have seemingly always performed better when they are not expected to (see 2018/19 as an example). Honestly, at this point, it may even be better for Andy Dalton to not work out, and then the Bears can tank for Draft picks. Regardless, Andy Dalton was the best move the Bears could have made because, at this point, it seems like any good move they make doesn’t work out.