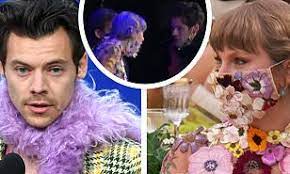 Millions tuned into this past weekend’s GRAMMY awards, which included performances from Taylor Swift, Harry Styles, Dua Lipa, and Da Baby. In the weeks leading up to the event, Taylor Swift and Harry Styles’s fans grew more and more excited about the possibility of a shared performance between the two artists, and ex’s. While this joint performance did not end up happening, fans were given a mini-reunion between the two artists, as they were spotted speaking to each other during the show.

Fans are frightened after witnessing this conversation, as they recognize the dire consequences that can come from a partnership between Styles and Swift, both famous for leaving “Easter eggs” in their albums. With a speed faster than your family dog running away from you with your favorite pair of socks in their mouth, fans took to the internet to analyze every aspect of the two’s outfits, instagram captions, and prior song lyrics. It was quickly uncovered that not only are the two planning to release 3 new albums together, but they also share custody over a cat, have an inside joke about flowers, and are planning their next birthday party together. Crazy to think that all of this was uncovered from Swift’s Instagram caption “The fans are the reason we’re floating tonight, and we’ll never forget it.” When questioning fan Mary Miles about how fans came to this conclusion, the Beacon was simply met with the answer, “It couldn’t be more obvious. Taylor Swift has a cat named Meredith, who is named after Ellen Pompeo’s character on Grey’s Anatomy. Meredith Grey has 3 children, and Taylor Swift has 2 cats, which means she must share a 3rd with Harry. Flowers float when you put them in water, which points us to the inside joke, and Harry was wearing a green scarf, which was the color of Swift’s last birthday cake, making it clear that their next birthday will be celebrated together.” Considering the clip of them talking is approximately 10 seconds long, we have to believe that Style and Swift can both speed talk in order to fit all of that in.

The Beacon also spoke with some fans with another read on the discussion. “I have to believe that they were speaking in code so as not to give fans any indication that something might be coming,” shared Barry Files, famous celebrity gossip analyst. Some even believe that English was not being spoken by the two artists. “Yes, if you analyze their body language, to any regular person it might appear that they are nodding and waving, but to a Haylor (Harry and Taylor) superfan like myself, it is obvious that they are utilizing a language they crafted for this very moment,” shared Terry Piles. The fans have lots of faith in the two that this is not the last of them together that we will be seeing. Now all we can do is wait and see what comes of this encounter.