CHICAGO, IL – We have recently obtained leaked internal e-mails and other electronic communications between Whitney Young higher-ups pointing to an investigation of an unknown staffer due to accusations by other employees of creating a hostile work environment. We’ve cross-referenced these sources and have found a number of insights into the story that one teacher called (in a message to a WY employee group chat) “a crisis more devastating to the culture of Whitney Young than when there was that school shooter threat.” (Their words, not mine; I believe this statement is highly insensitive)

We have few details of the specific incidents that provoked the investigation, with the leaked messages pointing more toward the identity of the accused staff member, but here are the details we were able to uncover:

-The staffer was seen “lurking suspiciously” around the academic building

While these details remain hazy, we at the Beacon believe we have an idea of who this employee is, and while our investigation isn’t entirely conclusive, we believe our findings and deduction are reliable enough to make the claim that the staffer under investigation is, in fact, Flip the Dolphin. Known for its energetic and emphatic support of WY athletics, it isn’t hard to imagine a scenario where co-workers perceive the dolphin’s celebration as threatening behavior, or, as one employee complained in an e-mail, “the material of nightmares— serial killer tendencies.” We will be releasing a more detailed record of our deductions that have led us to this conclusion, but suffice it to say that Flip may need to be more careful in the future to make its motives clear to fellow WY staff.

In response to the news, a few students shared thoughts on a Clubhouse chat room we were able to monitor. One senior asserted, “Flip’s actions are abhorrent, and we really can’t be letting school mascots do whatever they want under the guise of school spirit.” A classmate responded to this, saying “I’ve never spoken to Flip, but I’ve seen him around at a bunch of school functions, and I really don’t think he could’ve done this stuff. Maybe someone mistook another teacher for Flip or something, but it couldn’t have been him.” To this, an eighth-grader replied, “Wow, did you just assume Flip’s gender?”

We will be sure to keep readers updated on any new developments in this story. 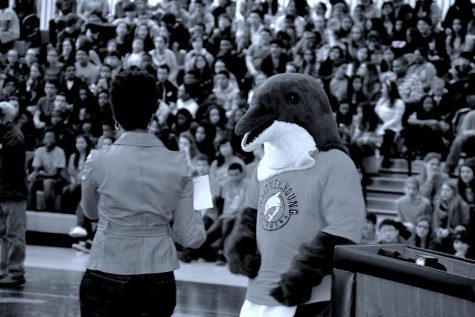