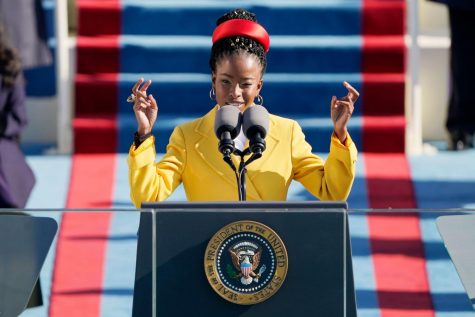 On January 20th, 2021, Joseph Biden officially became the 46th President of the United States. Some American’s praised this moment while others did not. However, on this day, I chose to focus on the youngest inaugural poet ever in the United States, Amanda Gorman. She is a 22-year old Black woman who recently graduated from Harvard University. The poem she recited was titled “The Hill We Climb.” I am not much of a poetry enthusiast, but I appreciate the flow and rhythm good poetry possesses and Amanda’s poem did just that. “I think what really made the entire moment special was the poise and grace she held on that stage. It was warming to see a Black woman, not much older than me in front of the entire nation,” Nairobi Toombs ‘21 said. While reading an interview former first lady Michelle Obama held with Gorman, Gorman was asked who she drew inspiration from. Her response included Yusef Komunyakaa, Sonia Sanchez, Frederick Douglass, and Hans Zimmer. I was captivated that her response included composers. I am a musician myself, and often times I don’t think about how all these forms of art are related to one another, but they really are. Carter Baker ‘22 said, “I think it’s important to remember that in music, poetry, visual art, etc, a story is usually being told. That is what connects all the art forms.” Amanda highlighted this in her interview with Michelle.

I decided to ask one of my friends, who is a poet, what her actual thoughts were on Gorman’s inaugural poem. “Because I spend a lot of time writing and reading poetry, I can be a bit of a snob. I thought her poem was fitting for the occasion, but there were definitely some parts that I didn’t think were that impressive. Hearing her deliver the poem was much more exciting than when I read the script myself. However, it’s a huge deal to be one of the faces of an inauguration, so for that, she is phenomenal,” Ruthie Zolla, DHS ‘21. Overall, it was a powerful day, and an exciting one for Amanda Gorman and other young girls who watched her at that podium.