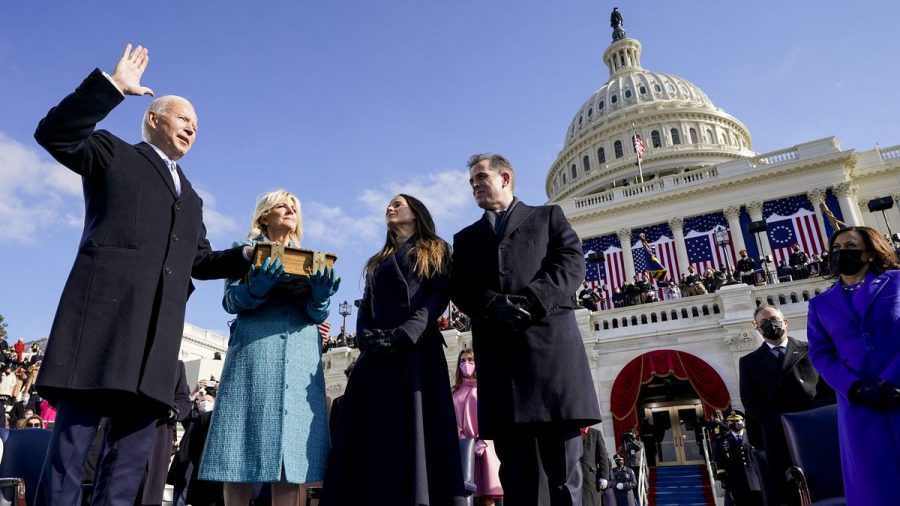 Joe Biden being sworn in as the 46th President

As most of us know, Joseph R. Biden, also known as Joe Biden, won the 2020 presidential election. Now with being inaugurated and sworn in on January 20th, The Beacon is analyzing all of Joe Biden’s historic firsts with his presidency.

Mr. Biden will become the first president from Delaware while also being the oldest president sworn in. The First Lady, Dr. Jill Biden, will become the first First Lady to hold a paying job outside of The White House. Although these are some historic victories and firsts, Mr. Biden’s cabinet appointees are the most historic wins. Just to name a few, former senator Kamala Harris will serve as the first female vice president while also being the first Black person and person of South Asian descent to serve and hold this position. Pete Buttigieg, former mayor of South Bend, has also been nominated to be the Secretary of Transportation. If appointed, Mr. Buttigieg will be the first openly gay cabinet member in the country’s history. General Lloyd Austin, has been nominated to be the Secretary of Defense. If appointed, he will the first Black person to hold the position. Alejandro Mayorkas, former director of U.S. Citizenship and Immigration Services, has been nominated to hold the position of Secretary of Homeland Security. If appointed, he will become the first immigrant and LatinX to serve in that position. The Biden-Harris administration will also have the first all-female communications team.

The Beacon is glad to hear the great diversity that the Biden-Harris administration will bring. It has asked some students about their thoughts on Biden’s Presidency. Cesar Ramos ‘22 stated, “I love to see the diversity and first-timers being incorporated into our government. I think that by electing Joe Biden as our 46th president, the U.S did a great job integrating more representation for ALL Americans.” Many students seemed to feel the same way as Cesar. Grace Cook ‘22 stated her pride and relief by saying only, “Thank God!” Another student, who did not want to be named just said, “It’s good to see new people in our government.” Students and people across the world are waiting to see how the Biden-Harris administration will handle modern issues including global warming, the economy, and handling the COVID-19 pandemic.