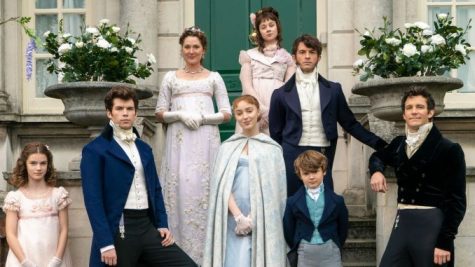 After a sudden and disorienting national shutdown, many of us are now stuck working or schooling at home. Whether we are on break, holiday, or just quarantining at home, everyone deserves a little time alone and the best way to do that is to stay home and watch a good movie or show. During my winter break, I decided to watch the new show Bridgerton and I am here to write an honest review.

The show is a Shonda Rhimes produced adaptation of Julia Quinn’s series of romance books, primarily focused on the story of Daphne Bridgerton, the oldest daughter of eight other Bridgertons. She falls for the Duke of Hastings in a plot to convince others that they are courting, so Lady Whistledown, the anonymous writer sharing gossip around town, will know that the Duke is courting and makes Daphne more wanted in the eyes of other suitors. It is a made up story until it is not and they start to fall in love.

We asked students at WY what they thought of the show. Morgan Michicich ‘21, said,“The set and costume design were incredible, and it was so fascinating to watch all of the characters’ lives become entangled. I heard that this season was based off of the first book in an eight-book series, so I really hope they create seasons for the other seven books as well! Also, I just read in an article that Daphne never wears the same dress twice, which is absolutely mind-boggling.” 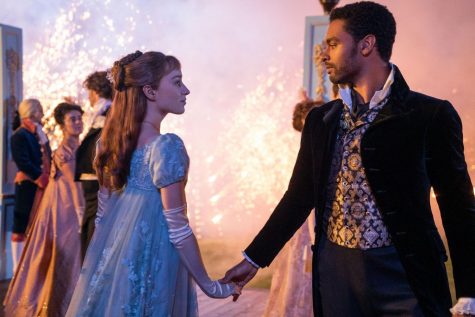 The Netflix series is a romantic show that focuses on character development, juggling Daphne’s unwarranted feelings coming out as a young woman in society, and addresses other romantic familial tensions. During the courting season, there are balls and promenades for of-age debutantes in the London society to form a marriage union that will elevate the family into a higher social landing which is very “Pride and Prejudice.” The story continues in a Gossip Girl manner where Lady Whistledown displays the gossip of the town.

The story plot has a nice twist on the factual and historical on-goings in 19th-century London with brightness and new fashion trends where corsets are all the rave now. The Duke of Hastings and Daphne Bridgerton’s 1800s formalwear seem like chic streetwear fashion now. The script of the show fully avoids the topic of race relations or skin color which manages to escape any controversy while feeling very modern. One of the best parts of the season is that the show has a complete ending where the storyline ends with the “fairy-tale” ending for the time being.

Corinne Salter ‘21, was pleased to see the characters be more fully developed, and she notes, “I thought it was really interesting to see a period piece with Black people portrayed as something other than slaves.”

However, the show is not as perfect as it sounds. Despite the attempt to avoid any race relations, the show merely touches the surface  on the story of Marina, a poor, clever woman of color that is taken in by the Featheringtons. Her storyline was a chance to fuel an interesting exploration of the aristocracy and their reactions but instead she is used as a device for drama within Featherington’s issues of class and money. As a symbol of social justice, she is sent off with no lasting impact on the character arc or plot of the other characters. The show also fails in its attempts to raise issues of consent and control by utilizing half-hearted attempts to address these issues. There are also instances of scenes with queer characters but it comes off as rather homophobic. Lastly, the show’s indirect intentions of reminding Simon, the Duke of his roots based on the color of his skin, feels unneeded and like a trope as he uses his friend, the boxer who is like Simon as a literal punching bag.

Still, Queenie Yu ‘21 appreciated what the show provided. She says, “This show was refreshing to watch because it was unlike most on Netflix or other streaming places, especially because of it taking place during the Regency Era.”

Despite the issues that are just scratching the surface, the show does a good job at achieving what was intended and is overall a great show to binge. The videography and script is very good while being easy to understand. At the end of the day, if anyone is looking for a new show to watch, you will find this is a good one to watch with only one season. I enjoyed watching the story unravel and the drama stirring in the pot.