Eating and Sleeping During Remote Learning

Over the course of the past year, students have been forced to make many sudden and stark transitions, from school to quarantine to multiple different remote learning schedules. This in turn has had a drastic effect on many of these students’ sleep schedules as well as their eating habits, myself included. My current diet consists mainly of microwaved chicken sandwiches and Rice Krispies eaten at sporadic intervals, sometimes eating nothing until dinner or even late at night. While I am now going to sleep around midnight, at one point during the summer I was going to bed at around 10 a.m. and sleeping well into the afternoon. Needless to say, breaking that habit once remote learning resumed was rather rough.

While this may be something of an extreme example, many students have been going through similar things. “I only sleep around 5 hours a night,” says Ivor Huggett ‘21, much less than the recommended 9.25 hours a night for a teenager. “I’ve also been really craving scrambled eggs,” he said. Daniel Lopez ‘21 has also been experiencing cravings. “I’ve been really wanting onion rings and Burger King nuggets,” he said. In terms of sleep, his “sleep schedule has been garbage.”

However, remote learning has not been a negative for everyone. When asked about his eating and sleeping habits, Mark Mulcrone ‘21 said “they have been much improved compared to a normal year.” This just goes to show that every student works differently. Nevertheless, I for one miss being able to sleep for 10 hours a night over the summer, even if the timing of that sleep may have been a little off. 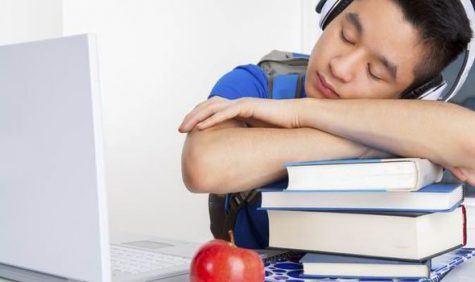