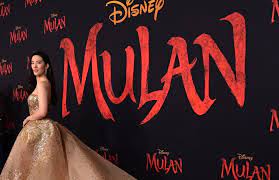 Disney’s live action take on the -iconic- movie, Mulan, arrived on Disney+ on September fourth. At first, many were very excited to see this movie, after the release of Disney live action takes on classic movies like Cinderella and Beauty And The Beast. To many fans’ surprise, Disney+ charged 30 dollars in order to view the movie. This was on top of the monthly charge for Disney+. Many people on social media were confused as to why they had to pay money to see a movie on a subscription service that they already pay for.

Emily Servin ‘21 was one of those people. She states, “It’s ridiculous that I already pay almost ten dollars a month and now they expect us all to pay thirty dollars for one movie.” On top of the already negative response to the movie, the actress who plays Mulan said that she supported the Hong Kong police in 2019. This upset a lot of people since Hong Kong protesters were fighting for democracy and were terrorized by the Hong Kong police. Joe N ‘22 said, “The lead actress supporting the suppression of Chinese people is something that we should not support.” They also filmed scenes of the movie in Xinjiang, a region in China where Uighur Muslims are reportedly being detained and forced to consume alcohol and pork, which is against their religion. People saw all of this as insensitive and wrong, especially during the current situation in America involving police and the Black Lives Matter movement. Additionally, many fans of the original movie disliked that most of the directors, costume makers, writers, and producers were not Asian. All of this caused activists and fans of the original movie to start a boycott on the live action film. Lu Diosado ‘22 said, “In my opinion, what Disney is doing is just immoral and inhumane.” Like Lu, many people believe Disney has some explaining to do.