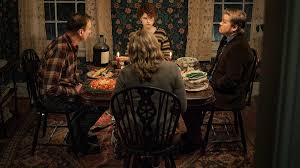 Over the many thousands of hours I have spent locked in my home over the past six months, I have watched nearly a hundred movies from many various genres, countries and time periods. From Hollywood Classics like His Girl Friday and Citizen Kane, to more contemporary masterpieces suchas The Lighthouse and Blindspotting, to complete disappointments like The Last Airbender, I and many others have turned to cinema for entertainment in this time of isolation. “I rewatched The Martian,” says Phin Hammond ‘22. “It’s still pretty fresh even 5 years after it came out.”  None, perhaps, has been more thought-provoking and strangely riveting to me than Charlie Kaufman’s new Netflix original film I’m Thinking of Ending Things.

The psychological drama tells what seems to be the story of a young woman who travels with her boyfriend to meet his parents for the first time. However, as the film continues it becomes less and less clear what is actually happening as reality starts to bend and even the very identities of the main characters become nebulous. Furthermore, unlike the book upon which it was based, the film offers no semblance of resolution or explanation for all of its surreal elements, leaving the entire film up to the interpretation of the individual viewer. Indeed, the film’s writer and director Charlie Kaufman said, “I’m not big on explaining what things are. I let people have their experiences, so I don’t really have expectations about what people are going to think.” For this reason, I find the movie is best enjoyed when you just accept what is happening and let it spark thought in your mind, rather than try to justify and rationalize what you are seeing, which for me only lead to frustration. In this sense it reminded me of Apichatpong Weerasethakul’s 2011 magnum opus Uncle Boonmee Who Can Recall His Past Lives in its inexplicable qualities and in the dreamlike watching experience. However, in terms of tone, I’m Thinking of Ending Things could not be more different from Weerasethakul’s work. While the latter is slow, peaceful, and sleepy, Kaufman’s film is tense and often anxiety inducing, jumping from uncomfortably funny to darkly thought-provoking to excruciatingly suspenseful. In this regard, one part of the film in particular stuck out to Ruth Hannah ‘23. “My favorite part was when they saw the clown,” she said, referring to a scene where the characters visit a surreal ice cream shop, known as “Tulsey Town,” featuring a clown mascot. “It really made me think about my life.”

While this movie had the potential to be a confusing mess, the script and direction on Kaufman’s part, the enthralling cinematography, and the strong performances by the film’s leads, Jesse Plemons and Jessie Buckley, make the movie overall a thoroughly captivating experience, as long as you do not require a plot that is linear or particularly comprehensible.