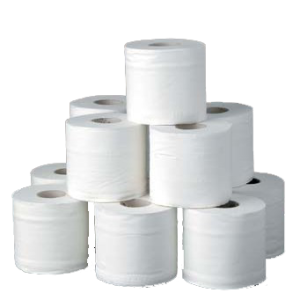 Last Monday, Tampa resident John Peters was hauled out of a massive toilet paper pile by The Tampa Fire Department. John had compiled 21 cases of Charmin Ultra, 19 cases of Kleenex, and a whopping 32 cases of Scott Toilet Paper. John says that he was stacking his 72 cases of toilet paper when his great Dane, Scooter, ran in and accidentally pushed the stacks over, causing John to be trapped under at least 50 cases of toilet paper for two days.

Scooter was not hurt. John’s young neighbors heard Scooter barking while they were playing outside and called the police. When no one but frantic Scooter was at the door, the police knew something was wrong. They alerted the Fire department who kicked down the door and found John under the mountain of toilet paper. It took a team of 30 men and 2 helicopters to save John from the enclosure. Officer Linda Good said, “I’ve never seen that much toilet paper in my life!” John was found unresponsive due to the lack of oxygen. He was admitted to Tampa General Hospital, where he was given an I.V. and some cookies.

This comes after recent news about Covid-19, an airborne and highly contagious virus spreading rapidly throughout the world. Some citizens have been hoarding necessities like toilet paper, paper towels, water, and food in the case of a lockdown. John was later found guilty of price gouging for selling his toilet paper to people on the internet for almost triple the price. John said, “I would’ve gotten away with it if it wasn’t for those kids and that dog.”

John was fined for his crimes and Scooter was taken away from him. The Police Department confiscated the toilet paper and distributed it to local shelters, orphanages, and hospitals. Tampa Firefighter Brook Johnson said, “The lesson here is to only buy what you need, or it might kill ya.” As Johnson said, we all need to be mindful that there are people who are less privileged who need these goods, too.