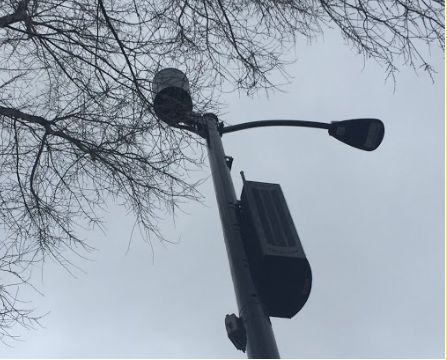 A 5G tower installed on the corner of Ashland and Jackson, one block from Whitney Young. (Photo credit Blake Carnes)

Despite the health risks, 5G towers are being installed in Chicago. 5G (the fifth generation of wireless technology) promises much faster download speeds and data transfer quick enough to further the possibility of self-driving cars. While towers for 4G service can be up to 200 feet tall, the 5G towers are small and clustered together, located on top of lampposts and buildings. They will eventually require consumers to purchase new 5G-compatible phones but, for now, will be compatible with many 4G or LTE devices. As futuristic as it seems, the new technology’s rapid rollout comes at an undeniable price: insufficient safety testing and, as a result, widespread electromagnetic radiation.

Mr. Gallo, a physics teacher at Whitney Young, has an unfortunate amount of experience with electromagnetic radiation. “It started when I found my daughter was getting sick with headaches, brain fog and a rapid heartbeat. This happened throughout the school, but was worst in the tech centers and near the laptop carts. The symptoms would go away when she left the building.” This led him to do further research into the subject, finding that phones and wi-fi routers alike can be dangerous to everyone. Although until recently it had been widely accepted that electromagnetic radiation could only cause biological harm when it caused heating, recent studies have found that even nonthermal radiation- the amount used for cell phones- can be harmful.

This is especially an area of concern since the Federal Communications Commission relies on outdated standards. “They need to do more testing. They need to revise the standards. The current ones are out of date,” says Mr. Gallo. The 5G towers are being installed much too quickly, and can and will pose significant health risks to people with electromagnetic sensitivity. “My daughter feels a sharp stabbing pain in her head when she passes by a 5G tower and will feel ill afterwards for hours. With the popping up of these towers everywhere in our neighborhood in the last 6 months, she is anxious to leave Chicago.”

The FCC isn’t likely to do much about increasing these standards, however, because of the influence that corporate interests hold over it. The Telecommunications Act of 1966, which prevents cell towers from being held to any environmental standards, gives companies an easy way to install infrastructure without being responsible. As a result, the towers are emitting dangerous radiation that according to research causes cellular stress and damage to DNA.

What can you do to stay safe from this radiation? “You can’t do much about towers being built near you,” he says, “but there are things you can control. You can control exposure to your cell phone and wi-fi router. Especially at night when you’re sleeping, keep your phone and wi-fi turned off.”

5G towers should not be established as they are. With insufficient Federal Communications Commission (FCC) standards, insufficient testing, and insufficient public knowledge about the dangers they pose, these towers could cause significant harm to the population. Stay safe in your own home by limiting your exposure to radiation, and remember to stay informed about the issues that corporate interests would prefer to keep in the dark.