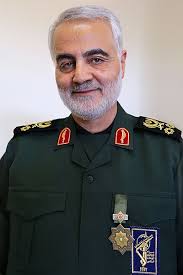 On January 2, 2020 the Department of Defense confirmed that the U.S. military had killed Qassem Saleimani, the Iranian regime’s top military general at the direction of President Donald J. Trump. Soleimani, the head of Iran’s elite Quds force, was terminated by a U.S. airstrike close to Baghdad International Airport on an early Friday morning. The strikes came after it was reported that 3 Katyusha rockets were launched at an Iraqi military base housing coalition counter terrorism forces. The U.S. military took decisive action to protect U.S. officials abroad by executing the head of the Iranian Revolutionary Guard Corps Quds force, a designated foreign terrorist organization. The DOD(Department of Defense) said in a statement that Soleimani was actively developing plans to attack american diplomats and service members in Iraq and throughout the region. He was also responsible for orchestrating the Dec 27 attacks on the Kirkuk military base in northern Iraq which killed an american and wounded several troops.

Throughout the years, Soleimani has been responsible for the deaths of hundreds of American and coalition service members and the wounding of thousands more. He also approved the attacks on the U.S. Embassy in Baghdad earlier that week. The strike was used to deter any future Iranian attack plans with the DoD announcing, “The United States will continue to take all necessary action to protect our people and our interests wherever they are around the world.” Soleimani is considered to be the architect behind the Iranian regimes foreign influence activities in the middle east as he is the leader of the Quds terrorist force. His death has been rumored several times during the past couple decades including in a 2006 plane crash which killed other Iranian military leaders, a 2012 bombing in Damascus that killed many top aides of Syrian leader Bashar Assad and rumors of his death also spread in 2015 that Soleimani was killed or seriously injured leading Syrian leader Assad’s forces around Aleppo, Syria. In April 2019 the U.S. declared Iran’s IRGC as a foreign terrorist organization making it the first time the U.S. designated part of a foreign government as a terror group.

The IRGC  was responsible for around 600 deaths or 17% of U.S. personnel deaths in Iraq from 2003 to 2011. The strikes that took Soleimani’s life also killed Abu Mahdi al-Muhandis, the deputy commander of Iraq’s Iran-backed Shi’ite militias known as the Popular Mobilization Forces (PMF). The PMF was formed in 2014 with about 140,000 members and is an Iraqi government sanctioned state umbrella group although most of the affiliated groups are backed by Iran. Abu Mahdi was also responsible for many other terrorist attacks including the 1983 attacks against the U.S. and French embassies in Kuwait and his long history of other terrorist and subversive activities. The death of both these top military officials helped fuel the local protests in Iraq and Iran which have been ongoing since October. There have been thousands of Iraqis who’ve taken to the streets to protest against the government who have been accused of being corrupt and controlled by the Iranian regime through militia groups. The uprisings have left over 450 protesters dead, mostly by the governments use of tear gas and live ammunition. These militia groups reportedly control 47 parliamentary seats which gives them significant influence in the Iraqi government.

I reached out to a handful of Whitney Young students for some comments on the story and their thoughts about the death of Soleimani,

“The guy is a terrorist and deserves nothing less than to be cleaned up by the U.S.,” exclaimed Unas Gurung, ’21.

“I just heard that they put a bounty on Donald Trump’s head for 3 million,” said Vicente Fernandez, ’23.

To conclude, Iranian Maj. General Qassem Soliemani’s death was one of the most significant events to happen to the Middle East in almost 70 years. Not only was he the second most powerful man in Iran; he was the most powerful individual in the Middle East. It was Soleimani who kept the religious rulers in power. He was the leader of the Quds force which trained, funded and directed numerous terrorist militias and also placed forces, equipment and human intelligence operatives all around the world. It was his mission to expand the Iranian influence using guns, threats, loyalty, money and fear to acquire his goals. He was behind the suppression of recent civil uprisings in Iran, killing around 1500 protesters. His death will only embolden those Iranians who stand for peace and freedom and continue to revolt against their brutal regime.