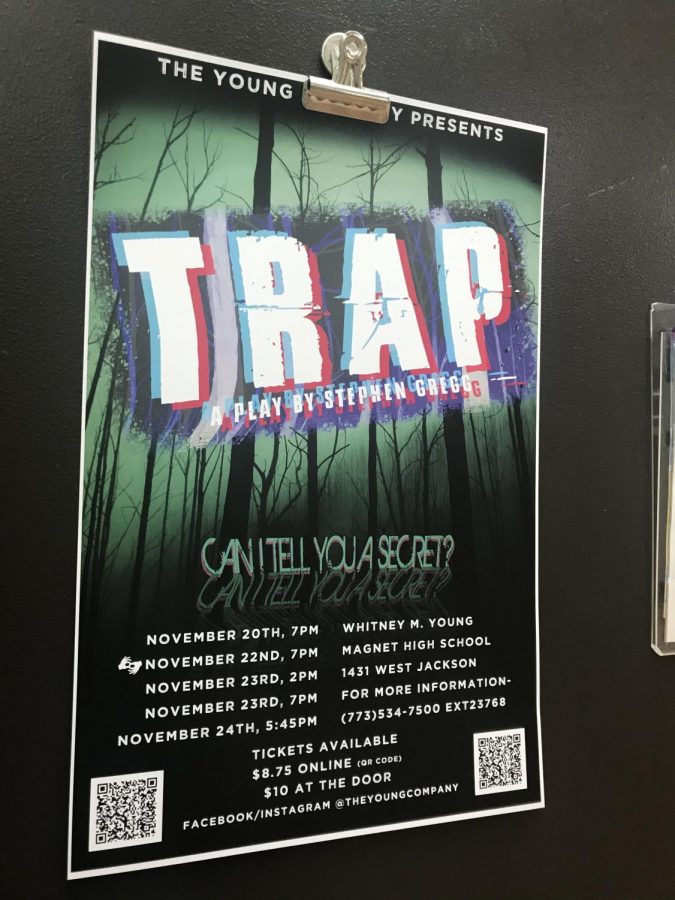 I had the pleasure of seeing The Young Company production of the play Trap by Stephen Gregg. Since I am deaf, I went to the November 22 showing that was ASL (American Sign Language) interpreted by Kelsey Cavanaugh and Tonia Glenn. I thought the student led production was very skillful. The combination of the exact ASL interpretation provided by Glenn and Cavanaugh including their facial expressions and the professional-like student led production including lighting and staging, made it easy for me to follow the play and to completely enjoy it. I have never been to a play like this. At first, I thought it was weird, then it got so exciting and I thought it was so cool. Besides the actual performance, so much detail and planning had to happen outside of the play in order to trick the audience. The promotional posters that kept changing as we got closer to opening night from “Don’t tell the secret” to “Can I tell you a secret” to finally “Trap” on the program all led up to audience anticipation and were all part of Stephen Gregg’s script. There is no other play that I have attended that have had scripts that include play posters, purposely making the audience wait outside of the theatre before being seated due to a fake “problem with the lights” delay and planting cast to sit in the audience pretending to be attendees. I loved how tricky the script is!

The fictional play’s genre is an eclectic mix of documentary, horror, mystery, science fiction and thriller. The play setting is Menachap, California where every person, but inexplicably one, in the audience of a high school play falls unconscious into a comatose state. Through interviews of victims, loved ones, witnesses and first responders, events unfold and we find out what happened.

All of the student actors were so impressive especially since most played more than one role. Grace Wilkerson, a senior, who played Detective Gwendolyn Heche was good at showing her character change from good woman trying to figure out what happened in the theatre to evil pharonoch, the aliens-like monster that wants to feed on fear. When Heche and Angela, played by senior Casey Wangman, went to the theatre together, I realized that she was bad by the way Heche smiled while she offers her hand to Angela. It’s the type of good acting and facial expressions I often see while watching movies where bad villains try to trick and lure good people. Senior Issac Diosdado convincingly played Ephrain Salas, the fireman who is at first the only person that can hear the chirps from the comatose bodies in the theatre. He was good at showing that he cares about these people and is determined to save them. He also effectively played the missing boy’s father who wants revenge. Nicole Davis, also a senior, who played the emotive Norma Pike is a good actress because she is good at showing that she is a lovesick woman who cursed the Oak Theatre. I like the way she dramatically acted when she entered the theater and said “Welcome to this theater. Your theater”. Through the use of a partially shaded screen, the audience was then able to see her hold up the goblet, smile and say “Drink with me” and then drown herself by drinking seawater. She also realistically played the 911 Operator. Junior Aneas Potts, played the roles of Tamblyn Grey, Marion Jay, and Clifton. All very different roles but Potts is so versatile and talented that he was able to transition from a scholarly scientist to a charming teenager that everybody likes with ease. Eleanor Van Houten, a freshman, who played fake Kenosha Silberling-Johnson was good at showing that she is at first, a frightened girl who wants the play to be cancelled then she unexpectedly and scarily transforms into a sassy, tricky, evil pharonoch who tries to trick the audience into not believing the real Kenosha, played by visiting actress Lilly Schar, when she tells them they are in danger. Lilly Schar was good at playing the hero and convincingly showing that she was the real Kenosha who can save the audience from the pharonochs. I like the way she used the music to end the fear and trick the pharonochs when she pretends to faint. When Heche takes the music from her, I got excited and thought “TAKE IT BACK!!!” One of my favorite parts of this play was right before “the play’s not over” I like how both Kenosha and other characters come together at the end.

Production stage manager Ariel Chumrley, a senior, and her crew did a fantastic job of setting the stage. As always, it was done so professionally, it was hard to believe that it was a high school play. I love the use of screens in this play to show newspaper articles about events and to show action taking place in different stage locations at the same time. A screen was also eerily and effectively used to show the 911 call. Because I am deaf, I probably more than others, rely on visuals and this play did not disappoint visually. The lighting crew was key on helping me focus on were key events were taking place. Not a lot of props were needed, but the few that were, were very effective. I liked how lights on IV poles were used to represent the fallen comatose audience members and of course the use of red goggles in the dark by the entire cast at the end was show stopping! It was also fun to see our drama teacher, the amazing director Dan Winkler, unexpectedly be a part of the script and tricking the audience. I asked people what they liked about Trap. Susan Martin, social worker, said “I liked how the audience was part of the play.” Julian Cronin, ‘21, noted, “I felt like I was part of the show. I’ve never felt that before.” Elaina Young, ‘20, stated, “It was a fantastic production! The way the story interweaves upon itself made it a really fun show!”

Mr. Winkler pointed out in class that in A Note From Stage Management, in the program, Ariel Chumrley cleverly wrote a hidden message that warned “Audience Your Lives Are In Danger Leave The Theater Before It’s Too Late.” As I read it, I saw that she also wrote “…we are dedicated to making sure everyone has access to the resources they need to be successful.” Some people didn’t realize the secret message right away. “I did! That is so cool,” noted Claire Harris, ‘21. Thank you Mr. Winkler, Ms. Bumble, Mrs. Cavanaugh, Ms. Glenn and cast and crew for always going out of your way to make your productions accessible. It is appreciated more than I can say!