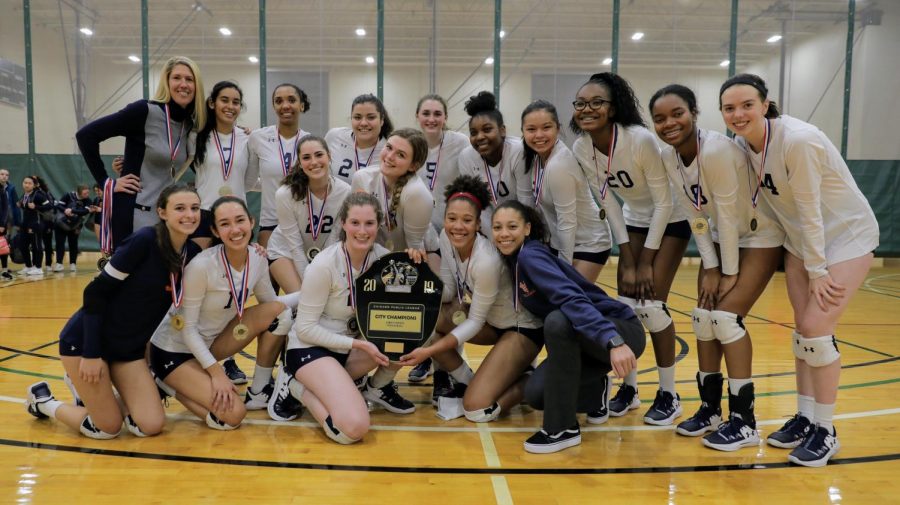 On Tuesday, November 5th, 2019, the JV and Varsity Girls Volleyball Team competed in the CPS City Championship game at Quest Multisport. The JV team played against Lane Tech, while Varsity played against Jones.  Fortunately, both teams came out victorious and won the CPS City title.

The first team that played was JV against Lane Tech.  This game was tense, as they had to take it to 3 sets.  Young won the first set 25-14; Lane Tech brought it back by winning the second set 25-23.  Fortunately, Young broke the tie by winning the final set 25-13 and thereby becoming the city champions.  Though it was a rough and close game, the Young JV team was able to bring back yet another CPS City award.  This experience was very rewarding and exciting for the freshmen and sophomores on the team.

JV Defensive Specialist, Sammi Yee, ‘23 says, “I’m super proud of how all of us have persevered and bonded through our season as a team; after a challenging season, being able to win the city finals and becoming city champions felt extremely rewarding.”

Immediately after the JV game, Varsity took the floor.  Seeing as half the team (8 people to be exact) are seniors, they were hungry to win, especially since Varsity was stripped of the opportunity to compete in State playoffs due to the teachers’ strike.  The team’s focus was very evident in their playing. Young was scrappy and aggressive, which helped them win the game in two sets. The final scores were 25-23 and 26-24. This was definitely a great way to finish off the seniors’ high school volleyball career.

Starting Right Side/Opposite Hitter, Gemma Tipping, ‘20 states, “It feels good to end the drought of us not winning City, and we all stepped up and played better than I’ve ever seen most of us play.  We played like a team.”

For the seniors on the team, winning City Championships was bittersweet; the victory is gratifying, but their last high school volleyball season is over.  Luckily, a few of our seniors are blessed with the opportunity to continue their volleyball career in college.

This experience was still very exciting for the non-seniors on both teams.  Young was finally able to take back the City Champion title after two years for JV and three years for Varsity.  Chelsea Thorpe, ‘22, starting Outside Hitter on Varsity, notes, “We really learned a lot this season and had to make a lot of adjustments, but it turned out to be good at the end.  Our seniors contributed a huge amount to make our program successful this year. We will miss them next year but we are only going up.” The volleyball players are determined to maintain this success in the upcoming years.  Hopefully, the Whitney Young Girls Volleyball teams will earn more titles in years to come!