“We’re about to go win real quick,” whispered player Jabari Ermon, ‘21, on his way to the locker room at Rockne Stadium.  His soft spoken prediction proved true. We narrowly defeated Von Steuben High School.  The scoreboard read 15-14 at the end of the contest.  It was an incredible sequence of teamwork and brotherhood that served as a great harbinger of amazement for the homecoming dance.  Our team of champions conquered another team this season. In contrast, the stadium of their adoring fans fell victim to the worst weather conditions the Class of 2020 has ever seen.  For the second consecutive year, the legendary Whitney Young homecoming football game showered crowds with rain and froze fans like mannequins.

Homecoming King Gabriel Levi, ’20, questioned, “Why does the homecoming game have to always be on the worst day of the week?”  The weather conditions throughout the week paled in comparison to the low temperatures and bouts of downpour during the game. Day after day, students  were reminded to bring umbrellas and our best jackets on game day. But the student body as a whole ignored toese suggestions as we took our best Pajama Day photos and fraternized with other grade levels on Class Color Day.  Kieran Collins, ‘22, shouted, “I was so mad when I realized I forgot my umbrella!” Collins continued, “Why couldn’t this be a volleyball game where we could’ve all stayed inside and warm?”

Chicago’s bipolar weather will never be predictable, but a consideration to change the homecoming date could alleviate the gloominess associated with our homecoming games.  In the past, the homecoming game had been played by the soccer team and received a lot of support from fans. There was not a cloud in the sky as the sun shone onto the field and filled our hearts with the sense of community that is always present at Whitney M. Young Magnet High School.  With climate change becoming a more concerning issue, wouldn’t we all benefit from a change of scenery so that we remain a School of Champions in style. 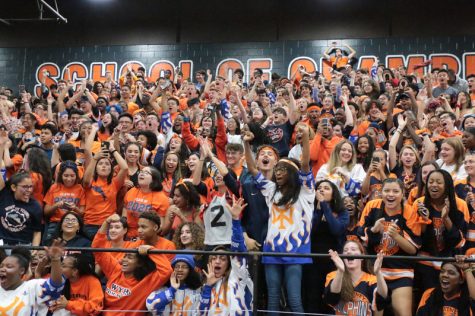