A Game of Chicken Sandwiches 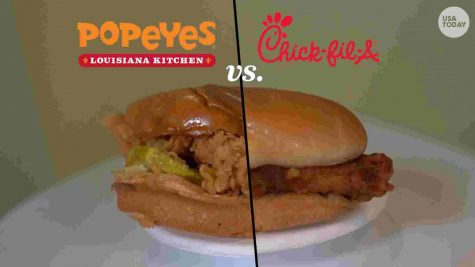 Chicken sandwiches have been the main talk among the youth over the last couple of months. Fast-food chain restaurants have engaged in  a vicious battle to determine who truly has the best chicken sandwich. The debate has surged across America, from Mcdonald’s to Burger King to Wendy’s. The topic has become a staple to social media platforms as well, and many “memes” have been made in response to the argument. However, it is clear that the two main players in this game are Popeyes and Chick-fil-A. When asked to pick their favorite between the two, the Whitney Young community did not fail to respond.

“Popeyes,” responded Daniel, ‘20. “Lowkey [not to be showy but], Popeyes chicken sandwich with Chick-fil-A sauce would be so good.”  Makeda, ‘21, stated that she has “never had the Popeyes chicken sandwich, but the one at Chick-fil-A is so good, so I’m gonna go with that.” When asked, Danielle, ‘22, reminded everyone of the importance of the inclusion of those who do not participate in the consumption of carnivorous products, and said that “you’re [the investigator] asking the wrong person. I am a vegetarian.” One point for Popeyes with a slight critique, one point for Chick-fil-A based on a biased attitude, and the tie-breaker point voided to both, from a vegetarian.

The world may never know which fast food enterprise has the best chicken sandwich, but it will be the hot topic of debate for millenia to come.