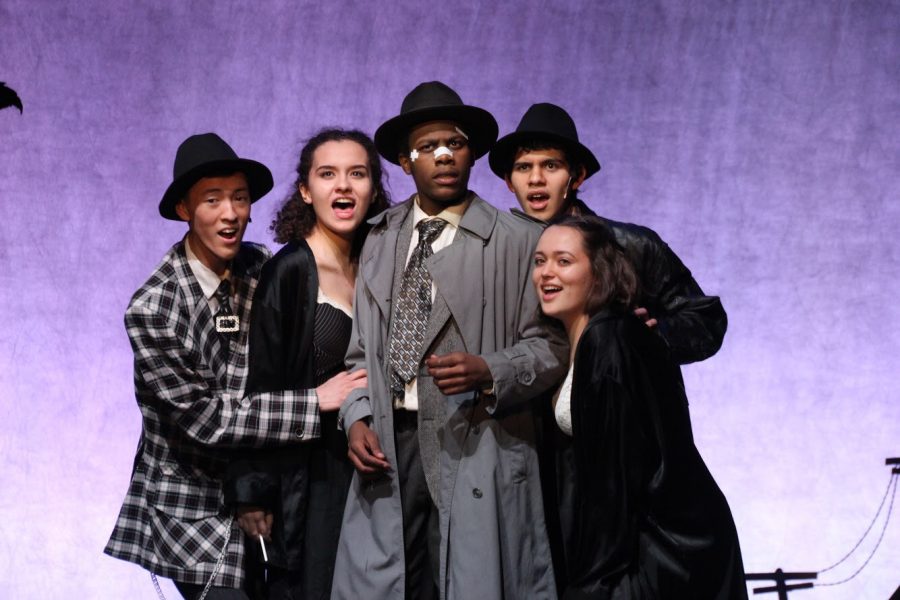 City of Angels by Larry Gelbart is set in late 1940s Hollywood. With music by Cy Coleman and lyrics by David Zippel, the musical is made up of two connecting storylines. It follows Stine’s (McKennen Campbell ‘19) struggle to adapt his novel, City of Angels, into a film. Within his film, Stone (Jay Owens ‘19) is hired to take on a missing persons case. While the Hollywood comedy is set in color, the detective drama within it is portrayed in black and white. The overlapping plots display the challenges Stine must face working on his screenplay, and the conflicts he projects onto his movie.

With the exception of two stationary desks on the sides of the stage, the set was completely mobile. Set changes allowed the stage to change from Stone’s apartment to a cocktail lounge in a matter of seconds. Set crew chief, Fran Harris ‘20 mentions, “this set is one of the most difficult sets we’ve ever done! There are more moving parts than any other set I’ve ever helped design and build. We actually had to completely reconfigure the wings and backstage area to accommodate all the moving pieces that we use throughout the show.” It is often forgotten that there is a whole separate world taking place behind stage to put on these shows, and the way The Young Company was able to handle scene changes discreetly is impressive.

Along with the hardworking students backstage, as I sat in the audience, I believe that the actors were extremely prepared for their first full run through. The pacing between lines was quick and light, leaving room for laughs and gasps. The musical was filled with comedy aimed for an older crowd, but The Young Company managed to fill the theater with laugher.

There were times where there was brutal feedback from the audio system, and parts where actors could have done a better job of projecting their voices. Only so much can be blamed on the faulty audio system, so it was unfortunate at times to lose the lyrics of an important song if the actors did not properly enunciate.

The show itself is a bit confusing as it goes back and forth between a real world and a ‘reel’ world, but the color schemes chosen to contrast the two storylines carried out smoothly. Art and costumes worked very well together to make sure that each character stood out in their place, and the lighting also added an extra touch of smokiness of the film noir. Under the direction of Mr Barbick, the Orchestra did a phenomenal job of tying in the elements of surprise and gloom over different scenes.

Overall the show was dazzling! It was very different from the shows The Young Company has presented in the past, so it was impressive to see how they put on such a complex production.

If you haven’t gotten a chance to see it, The young Company has four more shows listed below!