An Interview with Destiny Harris 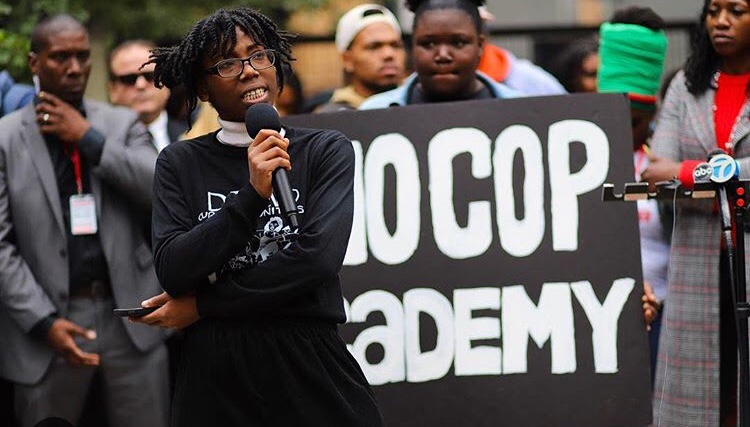 Whitney Young High School possesses the distinction of being host to one of the most diverse student bodies in the Nation. Furthermore, many students have assumed roles to highlight important issues, solve problems, and make positive impacts in our society and community. Destiny Harris ‘19 is an amazing example of such a student. Destiny is the Captain of the Poetry Slam Team, the President of the African American Culture Club, Actress in The Young Company, and a member of the #NoCopAcademy Campaign. I have witnessed first-hand her passionate stand against injustice in our city, and her desire to make a positive difference in the lives of her fellow Chicagoans. A major example of this is her being a member of the Museum of Contemporary Arts Teen Council. She also educates Chicagoans on the topics of Voter Registration and Education, and the positions of their aldermen and alderwomen. In addition, she is a part of the Kuumba Lynx Performance Ensemble, which is a collective of artists who use hip hop as a foundation for organizing their communities.

I have the pleasure of being able to interview this remarkable and dedicated individual for this article, and would like to thank Destiny for participating in the series; “Black History Month: People of Distinction.”

Alec: Thank you, Destiny for being here today and for participating in this series of articles, highlighting People of Distinction for February, Black History Month.

Destiny: Thanks for having me be a part of this wonderful initiative.

D: Art has always been something I’ve been passionate about, since I was little I always searched for a medium through which I could express my voice and speak stories of my experiences and for me that was Slam Poetry. Something about being able to bring your story to life through simile and theatrics and use of body made me fall in love with it and later on through the exploration of poetry I learned that it could be used as a mobile to talk about aspects of my identity I’m not completely secure in such as race, gender, sexuality, class etc. Things that affect the way I exist in my everyday life and my direct interests into these labels helped me determine my future interest in the study of Sociology and Psychology in college.

A: Building on what you said about expressing your voice, how have Campaigns and Groups like #NoCopAcademy and The MCA Teen Council provided mediums to use your voice to make and advocate for positive changes in your community, and in the city of Chicago? Also, how have Poetry and the Arts played a role in talking about issues important to you such as race, gender and sexuality?

D: The MCA teen creative agency is a collective of young artists all around Chicago who are passionate about art. Through my years of using art as a medium of exploration I’ve learned that my art and activism has almost become inseparable. In my mind most of the times my art is a form of resistance and the MCA teen creative agency gives young folks space to explore their art and their relationship with it along with offering up the resources of the museum for any experimentation as artist. #NoCopAcademy has allowed a platform for black and brown youth to be heard. Most social movements are organized by adults but #NoCopAcademy is “youth led, adult supported” and allows me to address issues directly affecting the way in which I exist in Chicago as a young, poor, queer POC. #NoCopAcademy allows me to engage in issues on a much more local scale contrary to my previous activism focused on issues in American society as a whole.

A: Do you feel that Whitney Young has provided a platform for you to use your voice, and for your voice to be heard- specifically pertaining to the issues you referenced earlier such as sexuality, race, gender etc.? If so, are there any specific examples you would like to mention? If there is room for improvement, how do you feel Whitney Young High School can improve in this respect?

D: I believe that Whitney Young has provided me a platform to be able to practice my activism in an academic institution. Whitney Young is extremely unique in its diversity and that has allowed me to gain greater knowledge of the different experiences of people in American society. Whitney Young has challenged me to be surrounded by people I wouldn’t usually interact with on a daily basis (due to Chicago’s great segregation) therefore allowing me to gain a greater understanding of what it looks like to advocate for and be allies to people who aren’t necessarily similar to you, but also what it looks like to challenge educational institutions when they don’t necessarily acknowledge all of the identities that exist within it. That being said Whitney Young is still heavily segregated and can do a lot more work to ensure all students feel safe and welcomed no matter their identity.

A: Earlier, when you were talking about #NoCopAcademy, the phrase “youth led, adult supported” really resonated with me. During the recent Mayoral Forum held at WY, several of the candidates mentioned advocating for putting more emphasis on youth roles in the city and how youth can make a difference- do you think they will make good on those promises, and in addition, do you think there is more adults, from teachers, parent/guardians, and principals to government officials, can do to help teens find their voice?

D: What a heavily loaded question Alec. I will start by saying I don’t under any circumstances want another mayor in office who isn’t invested in Black and Brown youth.  We are the ones who are directly affected by the laws and policies being put into place, and to ignore our existence is a slap in the face. There’s no way to know if a politician will do what they what they promised the people they would, but there are always ways to hold people accountable if elected in office, by constantly applying pressure. In today’s society adults (usually 30+)  are taken much more seriously when it comes to social resistance than us younger folks. The “youth led, adult supported” structure of #NoCopAcademy no longer allows for young voices to be put in the shadows and ignored but allows the people impacted the most by these issues to be advocates for themselves, rather than having adults advocate for them as if their voices don’t exist. This youth led structure allows for adults to handle the more background technical things that may be a little harder for younger people to do such as bringing forth a pool of connections. Adults tend to have better access to things such as lawyers, speakers, applying for grants, if there is a donation fund that needs to be set up, a call for volunteers etc.

A: What a beautifully and profoundly written answer. These days, it is crucial for young voices to be heard and recognized, especially pertaining to the decision-making processes which specifically impact youth. On that topic, what advice would you give to youth struggling to use, or trying to find their voice to advocate for positive change- whether that be due to outside resistance, or inner hesitancy?

A: Thank you so much for those inspirational words of wisdom. You have certainly inspired me to look into new ways to use my voice to speak out regarding issues that I am passionate about. Thank you for all you have done to encourage and educate the people and the youths, more specifically, in this school, community, and city to look within themselves and find that power, and use their voices to make a difference. It has been awesome interviewing you today, and thank you for collaborating with me in this series.

D: No Problem, and again thanks [to you and the WY Beacon Staff] for creating this series and ranting space for people like me to be able to speak our truths. Peace and Love àse  àse