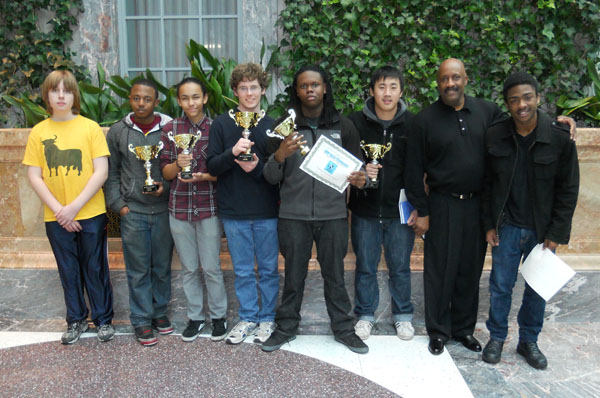 Mr. Swan with the 2013 WY Chess team. He is the second from the right, and his son, CJ, stands in the center with a trophy and a certificate.

When I was in sixth grade, I would have been wholly uninterested in applying to the WYAC, but for one thing. The chess team at Whitney Young. At that point in my life, I was interested in three things, chess, sports, and books, in that order. So having the chance to play every day with the incredibly strong players on the team just about blew my mind.

But when school started, my enthusiasm dampened immediately. I found out that I would not be allowed to play on the team until I was in high school, and I soon realized that going to practice was not high on my teammates’ list of priorities.

I would have quit going to these practices if it wasn’t for Coach Swan. His son had graduated two years ago, but he was still incredibly enthusiastic about supporting the team. He showed up nearly every day to play games with us, and even if only one person showed up to practice, he would be more than happy to play with them. Many times, that one person was me.

But his contribution to the team goes far beyond simply being there–we call him Coach for a reason. He didn’t play rated tournament chess, and this alone should have given me a sizable advantage over him. But every game I played against him was a struggle. It wasn’t until the end of the year that I started winning consistently. And even after I started winning, he kept playing. He played to win, but losses didn’t bother him–he was content to put up a fight, and when an impending loss became obvious, he would grin, and tell me I got him again.

I haven’t been to a single practice in which Coach Swan didn’t call for attention, holding up our games, in order to remind us to think positive. We joked about this behind his back, and to his face. We told him that good moves, and not good vibes, won games. But all this joking did not faze him a bit.

And eventually, we came around to his point of view. Every chess player eventually plays a game that is a struggle of wills rather than a struggle over the board. Mine happened at nationals, when a momentary lapse of concentration meant that I missed a shot that landed me in a worse position against a much lower-rated opponent. As angry as I was with myself, I remembered Coach Swan’s advice. I refused to make his attack easy, and kept a poker face even though I could see my opponent’s path to victory clearly. Little by little, I climbed back into the game, and then beat him. I went on to win the tournament, and when I went to practice the next day, I told Coach Swan what happened.  He grinned and called the rest of the team over for another speech about the virtues of positive thinking.

Coach Swan helped me improve as a chess player, but most importantly, he taught me that chess isn’t played with only the hands and the mind, but with the heart as well.